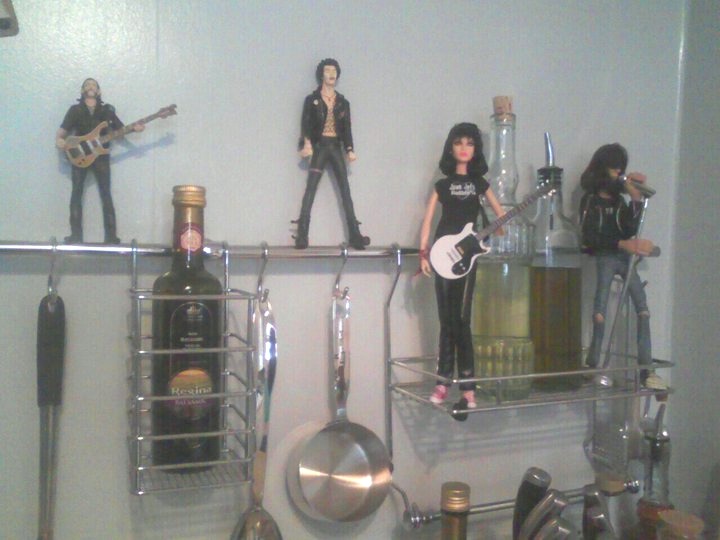 Welcome to the new and improved Carano's Cucina. I make a lot of kick ass food and go out to some amazing restaurants. Take a look around and make yourself at home :)

I'm in Love with Salted Dough

Being as I live about a mile from Salted Dough, the new Italian/Pizza place on Broadview Rd. in Broadview Hts., I've been watching the progress of when it would be opening.  Watching with excitement!  As someone who makes pizza almost daily, the name alone sparks interest.  What kind of salt?  How will it be salted?   I need more information pronto!   Well, they opened about 2 months ago and they've been featured in several publications, blogs, TV shows etc.  I was hearing there were lines out the door.  I gave it as much time as I could stand and finally went last night. 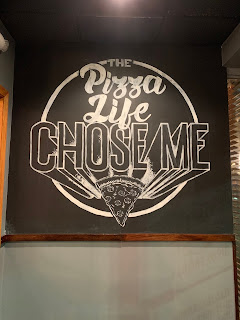 We got there knowing that there was going to be a wait.  We were told about 30 minutes for a table and took a seat in their small waiting area right in front of the gelato case.  Oh my.  Homemade gelato, staring at me.  I stared back.  Eventually the hostess noticed my drool and asked me if I wanted to try any.  Really!?  Do I???   Um, yes please.  I asked if any of them were Nutella flavored.  Hey, I'm nothing if not consistent!  And much to my delight, there was one and I got a little sample.  Delicious!   Like frozen Nutella.  Oh I'm going to like this place!

After sitting for about 10 minutes or so, Ricky the bartender came over and asked if he could get us something from the bar while we wait.  Seriously?  I don't think that's ever happened before.  Again, yes please!  I order a cocktail called Strawberry Bushel Smash and it was delicious!  Strawberry vodka, lemon, thyme sprig in the drink.  It was lovely. 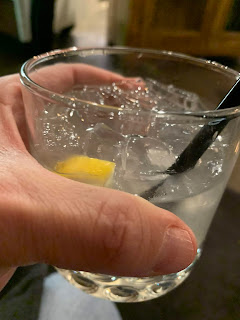 As we sat and I enjoyed my cocktail, again I'm surprised when the hostess came around with a plate of small topped crostini for all the people waiting.  She came by and asked us if we wanted to try one.  Absolutely!   It was a delightful little bite of bread, cream cheese or creme fraiche and a slice of perhaps salmon over the top.  Sorry, I forgot to take pic, I was so taken aback that they were feeding the people who were waiting free food.   About 5 minutes later we were treated to another!  This time it was crostini with sauce and pepperoni. 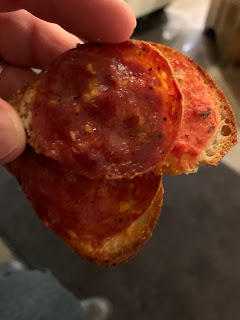 We actually saw a third come out, but our time was up and our name was called.  It was time to take our seat.  Now, we did a little menu investigating before we went but still, looking at the menu in person and there were just so many wonderful sounding things!  Whatever will we do!? 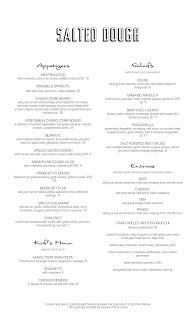 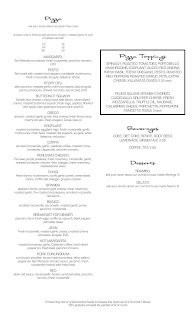 We decided to forgo a salad this time and instead get two appetizers.  They all sounded so good!  We chose the Brussel Sprouts and our waitress Nancy seemed rather pleased with that selection.  We soon found out why.  Cooked to perfection, beautifully browned and delicious with crispy fried shallots, Romano cheese and dijon aioli over the top.  Perfect. 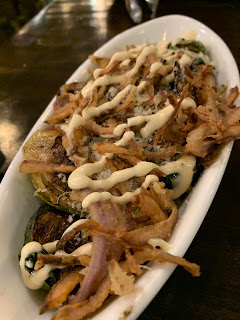 Our second app was Burrata.  Burrata itself is decadent and delicious.  This Burrata was no exception.  But to guild the lily a bit, it is served on top a bed of butternut squash with lime pickle honey, pumpkin seed oil, and apple cider gastrique.  Served with crostini.  I detected a bit of cinnamon perhaps on the squash.  It was creamy and luscious. All in all, I'd get this again in a heartbeat!

Now it's time.  It's time for the main attraction.  While so many of the entrees on the menu sounded incredible, I was there for pizza.  Salted Dough brushes every pizza dough with garlic oil and sprinkles Pink Himalayan salt and Romano cheese on the crust.  Be still my heart.  After much discussion, we opted for two 10 inch pizzas.  Our first was the Peruvian Chicken.  The fact that I wanted this is slightly out of character for me.  I'm not one for chicken on a pizza.   It's not that it's bad, like say, pineapple (ACK!!!!!).  It's just that, for me, chicken doesn't belong on a pizza.  But all the other ingredients had me.  I had to have it!   Peruvian purple potatoes (my fave!), feta (love!), rosemary, roasted tomatoes, garlic, motz and the piece de resistance, Castelvetrano olives (OMG YUM!).  I'd go so far as to say if your description includes the words Castelvetrano olives, I'm ordering whatever that is.  To say this was good would not do it justice.   Saying it was delicious isn't enough.  This was stunning.  Outstanding.  Gorgeous.  Gimme that pie now!!!!! 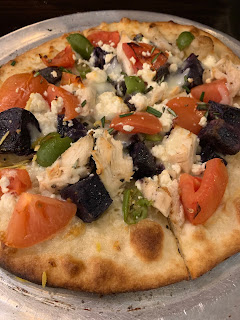 Look at that crust.  Charred where it should be.  Bubbled just enough.  Feta, tomatoes, olives which anywhere else would be called the Mediterranean.  Salted Dough calls it the Peruvian Chicken to highlight those nuggets and not be lumped in with all the other Mediterranean's out there.  Yum.

Our second choice was the Pork Conundrum.  Porky goodness!  So much porky goodness!   This pie had a bit of tomato sauce, pork shoulder, house made porchetta, salami, pepperoni and motz with some fresh basil over the top.   This pie was no conundrum.  I was not the least bit confused by my feelings for this pizza.  Pork, pork and more pork.  How can anything about this be bad?  It can't.  It's wonderful. 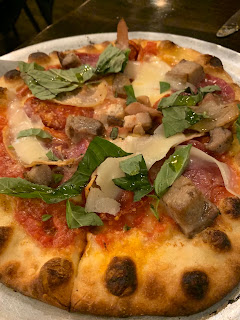 All in all, Salted Dough lived up to every expectation I had and then some.  I cannot wait to go back!
Posted by zbragrrl at 7:44 PM

Glad to see you back!

Promote Your Page Too

Add to your blog